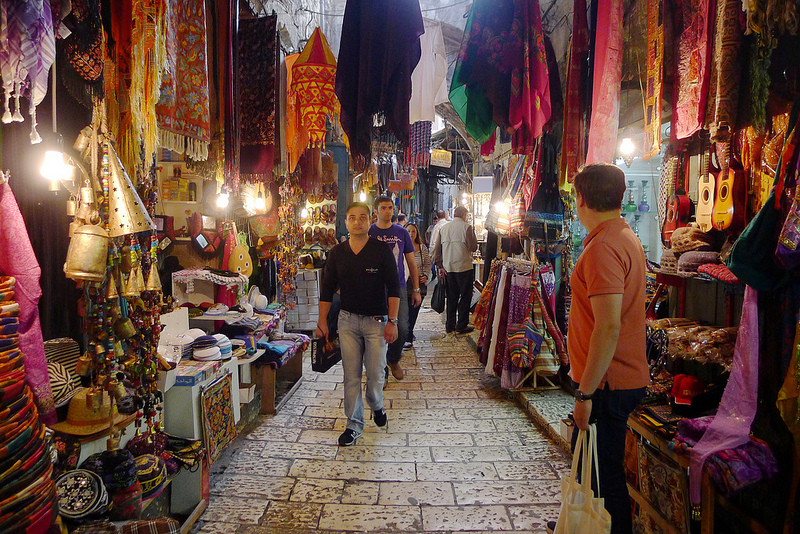 ISRAEL. A country with history like few others. Haven been giving the chance to visit Jerusalem, see the Western Wall, the Church of the Holy Sepulchre, Qubbat As-Sakhrah, I feel amazed. To have been given the opportunity to walk streets that have been walked for thousands of years, and that can be read about in holy scripts read by people around the world.

We stayed in Tel Aviv for four days, renting a car to go visit Jerusalem and the Dead Sea during one day. Tel Aviv felt like a young city, with restaurants and pubs along every street. People walking about a late Thursday evening, espresso houses packed with coffee lovers along Sdrot Rothschild, a street musician playing saxophone attracting a crowd, small designer stores open until late along Shabazi. Great food, great atmosphere and amazing mojitos (they literally had a different recipe for every bar we visited ranging from mandarin to cinnamon to one consisting of sambuca and basil). Just one kilometer away from the city center Old Jaffa, a city built over 4000 years ago, overlooks the beaches and skyline of Tel Aviv, and seems a refuge for both tourists and lovers sitting close together on benches trying to grasp the view. Take a walk from Jaffa port up to the old city, following alleys and stone stairs. It’s like taking a walk in a history book, buildings seem untouched and unchanged during all this time. And when you reach the top of all the stairs and alleys, you’ll find the view. Jerusalem had a completely different feel. Only visiting for some hours, we chose to focus on the old city, entering through Jaffa gate in the south, coming straight in to the Armenian quarter. Jerusalem is filled with market places going under the old city like an enormous labyrinth. Spices, religious souvenirs, clothing, instruments, furniture and bags. After walking around in the underground for a while we came into the Jewish quarter, and soon found ourselves standing at top of old Jerusalem with a view over both the Western wall and the Dome of the rock. I took the opportunity to walk up close to the Western wall, being separated into two; one side for the men and one for the women. People holding holy scripts, begging by the wall, touching, crying, talking aloud. One of those moments that will be carried with me forever. We walked on through the Muslim quarter, just at the time of Adhan. Visiting on a Friday we as tourists were asked not to proceed to the Dome of the rock by people sitting around on the narrow streets. We did get the opportunity to walk into the Christian quarter and
the Church of the Holy Sepulchre, a church built on the place were Jesus is believed to have been crucified. Again I was deeply moved by the effect the place had for visitors entering the church, lighting candles, lovingly touching every detail of the building, talking in a low tone, crying, laughing. Were I to go back to Jerusalem, I would most probably make sure to have a guide with me, in order to fully be able to grasp all the historical and religious sites. Our next stop was at the Dead Sea. Travling on route 1 from Jerusalem, across the West Bank. The Dead Sea lays 423 metres below sea level which is the Earth’s lowest elevation on land. It borders Israel and the West Bank to the west, and Jordan to the east. With its high concentration of salt, the water and the mud around the shores is believed to have extraordinary health benefits, which has attracted visitors for thousands of years. We arrived by car to Kalia Beach, and paid 50 shekel each to enter the beach area. Something which was recommended because you have to shower after having entered the water and exposing yourself to all the salt. The landscape was quiet naked, but mesmerizing. The air felt different. Salt. And laying at such a low level, the view to both the west and east is of high sand mountains and hills. A natural sanctuary, containing no actual life other than visitors. What I’ve always read was true. Just entering into the water you can feel yourself floating without effort. In fact, warning signs around the beach forbid anyone to swim on their stomach, due to the danger of swallowing the salt water. Life guards were on the alert, shouting out to anyone attempting to swim to turn around and float on their backs. The bottom of the sea is sandy and muddy. Just like I’ve always seen people do in films and in pictures I rubbed my entire body in the mud. I’ve never felt my body become smoother than in that instant. Around us in the water we could see people of all ages just relaxing. Moving slowly in the water, grasping the last rays of sun, before the dark fell upon us and the sun set behind the sand dunes in the West Bank at 5pm.

One country. Three very different places and experiences. Unfortunately we were not able to visit Bethlehem or Nazareth, due to the conflict in the country. For me, the city that had seemed the most interesting before our trip, Jericho with its 10 000 years of history, was also out of reach even though we passed just 2km from it. When renting our car from Avis we were told that we could not enter any Palestinian territory. However, if you go with a tourist group on an arranged tour, you are able to enter these cities. At least that was the case during our visit last week.

Six days ago we were walking on the streets of Tel Aviv. Just four days later the situation in Israel and Gaza worsened and missiles were fired by both sides. I’d like to send my thoughts and condolence to the Israeli and Palestinian people.